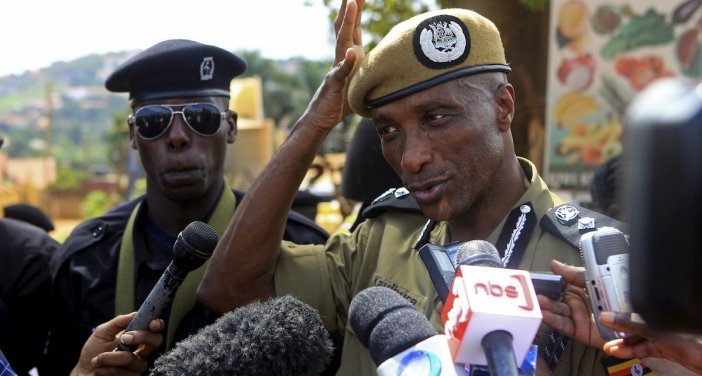 Detained former Inspector General of Police Gen Kale Kayihura has handed over weapons in his possession to the armed forces.

Kayihura was airlifted from his farmhouse in Kashagama, Lyantonde District this past Wednesday to Entebbe Airbase before being chauffeured to Makindye Military barracks where he is held.

ChimpReports on Tuesday learned that Kayihura surrendered a pistol, guns and a radio handset to UPDF officers when he was aboard the chopper enroute to Entebbe.

“Gen Kayihura had weapons he is entitled to as a General. He handed them over as he was being flown to Entebbe,” said a family member who spoke on condition of anonymity.

Kayihura is currently guarded by the military police at a residence in Makindye Barracks.

The army has as well taken charge of his security whenever he is being chauffeured in Kampala.

This development comes against the backdrop of reports that guns including one used to kill AIGP Felix Kaweesi were found hidden at Gen Kayihura’s residence in Muyenga.

“What we can say is it is a total lie,” said KAA when asked to comment about the situation.

The law firm was last week instructed by Gen Kayihura to represent him during these trying circumstances.

Asked to shed more light on the search of the General’s home in Muyenga last week, KAA responded : “We can’t discuss the details of the search though.”

Kayihura was escorted by the military to Muyenga where police detectives combed the plush residence for several hours.

As of Tuesday, Kayihura was still being held at Makindye. President Museveni is expected to address Parliament on Wednesday about state of security in Uganda.