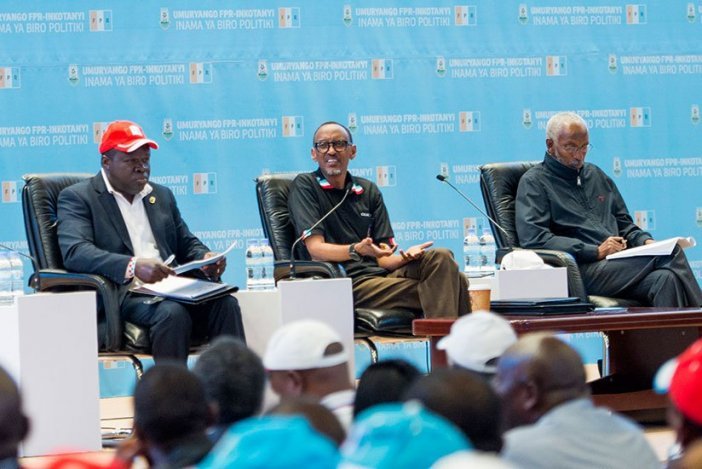 Kigali, Rwanda– As President Kagame commences his third term after garnering a whopping 98% of votes in the recently concluded presidential polls, we take you behind the curtains on what could have forced or led him to seek a third term which contradicts what he said after his re-election in 2010 when he stated he would not be seeking to rule beyond two terms.

A leaked in-house memo of the ruling Rwandan Patriotic Front (RPF) has revealed how President Paul Kagame was presented with alternative presidential candidates and how they were rated.

The memo which Great Lakes Voice has seen was prepared by a team of elites who were set to study Kagame’s assignment for “change and continuity” under the strict supervision of RPF’s secretariat during the time when the RPF still entertained the idea of a Kagame succession.

This team was a result of a directive set by ruling party during an extended-politburo meeting held at Amahoro stadium in February 2013. The team included Francios Ngarambe, Tito Rutaremara, Shyaka Anastase, Maureen Wanziga, Monique Mukaruliza and Bizimana Damascene.

According to the memo, the team shortlisted five candidates from whom the RPF and Kagame would choose a proper candidate come 2017.

On the top of the list, was Foreign Minister Louise Mushikiwabo whom the paper described as charismatic, a good negotiator and result oriented. The team also found Mushikiwabo to be good in communication skills, understanding the RPF line of thinking and diplomacy. According to the memo, Mushikiwabo would be the right candidate since she is a woman with high regard.

However, the memo criticized Mushikiwabo for not having influence over the military and being married to the white husband which could be seen as a contradiction of RPF which preaches Pan-Africanism. Mushikiwabo is rated high in popularity within the country and with the international community.

The second on the list was Christopher Bazivamo who at the time was a legislator with East African Legislative Assembly which seats in Arusha Tanzania and is currently the deputy Secretary General of EAC. He is also the vice chairman of the ruling RPF. Bazivamo was seen as the most likable and obedient enough to implement RPF’s agenda. He was also described as somewhat popular among the local population but not at the international arena.

Unsurprisingly, Dr. Donald Kaberuka, an economist, who is the former President of African Development Bank also made the list. Kaberuka, who is praised for having the skills and ability to develop Rwanda is also said to be an RPF loyalist by heart. Kaberuka is praised by the international community as a performer. Kaberuka is believed to be the best economist the country has.

However, in the memo, Kaberuka is criticized for not understanding the dirty politics and lack of ability to maintain full control of the party. He was seen as someone who would be liberal and so lenient with RPF members who go rogue. Kaberuka is also seen as someone who is so distant from the military which is regarded as the RPF’s engine.

Another on the list is close Kagame aide Francis Gatare, he is believed to be loyal to the RPF, loyal to Kagame, a performer with high discipline. Gatare, who currently heads the Petroleum board is said to be unknown/unpopular with the common Rwandans. He was said to be too much technocrat than a politician. Actually, the memo recommended him as a person who would make a right Prime Minister.

Finally mentioned was Dr. Maj Richard Sezibera- the former Secretary General of the East African Community, who is seen as popular, organized and qualified. The former Health Minister currently a senator is described as having the ability to work with Rwanda Defence Forces (RDF). Sezibera himself is a major in RDF. He is regarded as efficient and cool.

Our sources in three of East African countries and some diplomats intimated to this publication at different times that Dr. Sezibera was expected to take over as the President of Rwanda. However, the memo criticized him on how he manages his private life.

The memo also outlines a number of current national security and diplomatic threats. The security threats included the interpretation of the circumstances under which donors cut aid blaming Rwanda of supporting M23 rebels in Congo, alleged RNC recruitment and owing to RDF history as a revolutionary force, the extent of cohesiveness as a professional force respecting another commander -in- chief who is not their historical leader. The team concluded that Rwanda was still fragile in terms of security and this was a major point in convincing Kagame to accept to run again.

According to sources, when the list of the five candidates was handed to President Paul Kagame, something happened. As the document provided reasons to disqualify each would be the successor, it naturally had one vital recommendation that Kagame accepts to come back in 2017 thus the need to change of constitution. It was further recommended that Kagame should embark on reforming the military during the third term. Noteworthy, none of the top army generals made the list of potential successors.

Our sources also say, there was a group of RDF officers who were moving to advise President Kagame not to accept a third term. Their argument was that he would be accepting to put politics into fragility mode by default.

Allegedly the group was busted way before they could agree on who and how to formulate their mode of approach.

Our sources inside RDF command insist some of these officers were detained, as a result, many of them had they contract with RDF terminated. However, this publication could not independently verify these claims.

Other sources close to Urugwiro president’s office intimated to this publication that President Kagame had promised his family that he would not accept a third term. But after various meetings with the panel and the secretariat, Kagame approached his family to explain the developments that people and the party want him back. Sources in Urugwiro say the family remained adamant for three months. Afterwards, they okayed the idea of a third term and a process to amend the constitution kicked off shortly after.