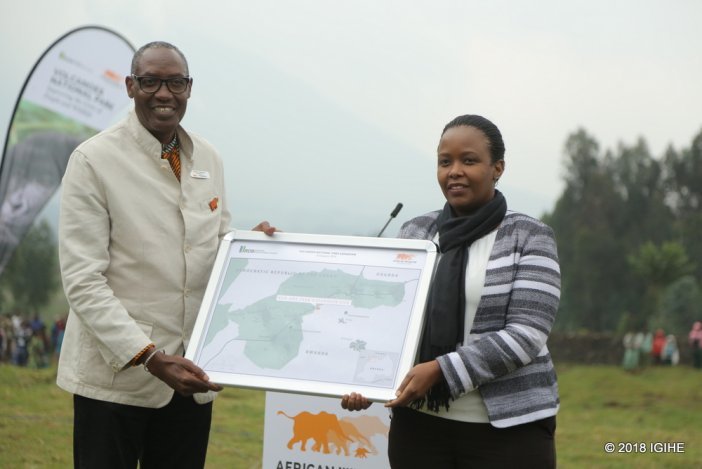 African Wildlife Fund (AWF) has donated 27.8 hectares of land to Rwanda Development Board (RDB) for the expansion of gorillas’ habitat in the Volcanoes National Park.

The handover ceremony took place in Kinigi area of the Northern Province on Tuesday.

The property adds to the 16,000 hectares that had formerly comprised the national park.

Volcanoes National Park is home of the critically endangered mountain gorillas but the space has decreased by 54% since its establishment in 1925. Due to conservation efforts by the Government of Rwanda and its conservation partners, mountain gorilla numbers are recovering.

“Today’s donation to the Volcanoes National Park is a major step in the consolidation of Rwanda’s conservation gains for the benefit of communities today and future generations. Through gorilla conservation and tourism, we are directly benefitting from these wonderful animals. Over the last nine years, revenues from mountain gorilla conservation and the resulting tourism has brought $107 million into the national coffers,” she said.

“In addition, in partnership with fellow conservationists, over 700 community-based projects providing housing, schools, health clinics, water tanks have been provided for the communities living in 12 sectors from four districts surrounding the Volcanoes National Park”, she said.

AWF President Kaddu Sebunya said Rwanda had distinguished itself as a leader in conservation following the most remarkable great ape recovery.

“I am excited by the great strides Rwanda is taking to develop its natural heritage sustainably and guarantee long-term socio-economic stability for its people. Through proactive government policies, community involvement and open governance, Rwanda is demonstrating that development and conservation are inseparable. Such a win-win approach to conservation suggests that there is nothing inevitable about conservation challenges in Africa today,” Kaddu said.

He said Rwanda and RDB had provided a template for sustainable development.

“With support from the Annenburg Foundation, AWF bought 27.8 hectares of land directly adjacent to the Park to donate to the Government of Rwanda to be incorporated into the Volcanoes National Park. AWF recognises that if mountain gorillas are going to survive in the long-term, this park must be strategically protected and we are committed to supporting RDB in this endeavour,” he said.